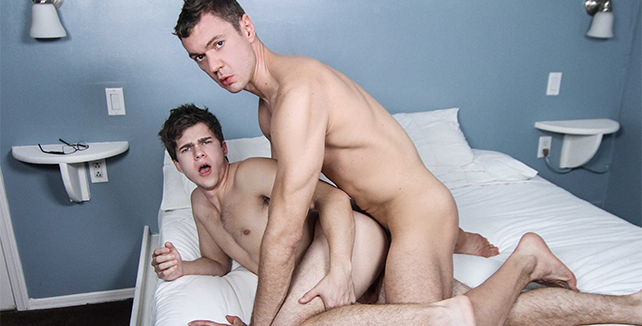 Brandon Blake is out for a walk and is taken by Will Braun’s college boy looks as he sees him sitting down on the sidewalk. Will looks up at him with his sexy blue eyes and smiles sweetly as Brandon asks him for sex. Will tells him $30.00, and they go off together back to Brandon’s apartment.

They get naked straight away, and as Will stands by the bed, Brandon lies on top of it with his ass on show and starts sucking on Will’s juicy cock. Will is soon moaning and groaning with lust, and Brandon deep throats his cock. The camera gets in close, and we see Will’s cock disappear all the way into Brandon’s cock sucking lips until his pubes are nestled over Brandon’s nose. Will grabs the back of Brandon’s head as he starts to face fuck him, and as Brandon gets more and more excited, he tells Will to fuck him.
Brandon rolls over onto his back and Will rolls on a condom as he watches Brandon lifting his legs up and opening them so that Will can get easy access to his eager butt hole. Will looks down into Brandon’s eyes, smiles sweetly again, and thrusts his hips forward as his cock slides all the way in. Brandon groans out deeply with excitement as Will slides his cock back out, and then drives it back in time and time again.

EXCLUSIVE SUMMER OFFER
JOIN SEANCODY AND MEN !!!
BOTH FOR ONLY $1 TRIAL